The WBA is a Bellingham, Washington-based business advocacy organization, founded in April of 2012 by Tony Larson, nicknamed “Tea Party Tony” for his activities over the years in local politics.

Larson’s column could appear on the surface, to be primarily about some demonstrations which occurred in Bellingham in 2017 in opposition to fossil fuel projects, and about what businesses can do when there may be a demonstration at their place of business. However, in thoroughly reading Larson’s column, it would seem that he used it as an opportunity to paint the demonstrators he referenced in a negative light, to prop up the local fossil fuel industry at Cherry Point, and to tout the virtues of liquified-natural-gas (LNG). Larson also used his column as an opportunity to voice what he said was the WBA’s concern about the “moratorium on fossil fuel exports from the Cherry Point industrial UGA [Urban Growth Area].”

What Larson described as a “moratorium on fossil fuel exports,” is more precisely a 6-month interim moratorium that was approved by the Whatcom County Council, prohibiting the filing, acceptance and processing of applications and permits for new or expanded facilities that would facilitate the increased shipment of unrefined fossil fuels out of Cherry Point.

That 6-month interim moratorium stems from when the County Council, on August 9, 2016, originally approved an emergency moratorium imposing a 60-day temporary moratorium prohibiting the filing and acceptance of applications for County permits for any new or expanded facilities which would facilitate the increased shipment of unrefined fossil fuels coming out of Cherry Point.

Since that emergency moratorium, the County Council has subsequently approved three additional 6-month interim moratoriums extending that same policy, the most recent of which, Council approved on September 26, 2017. On February 27, 2018, the County Council will hold a public hearing on this matter, to decide whether to extend the policy for another 6-months.

The interim ordinance imposing a moratorium has been vital to providing land use planning policy guidelines which strengthen protection to the critically sensitive marine environment in and around the areas at Cherry Point, as well as to the culturally and spiritually significant properties of Lummi Nation, to protect Lummi treaty rights, and to protect public health and safety during the time period that the Cherry Point Amendments had been under review for the County’s recent Comprehensive Plan Update.

The interim ordinance has also continued to 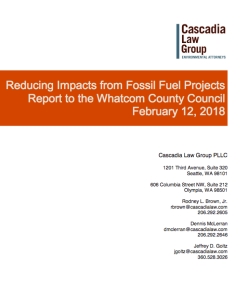 Cascadia Law Group PLLC released its 293-page report on February 12, 2018, and now the County Council needs time to review, consider, and potentially take action on the report’s findings. Also, there needs to be proper time afforded to the public to weigh-in on any new policies that Council may want to set in place in an effort to protect our community from the adverse impacts which occur from fossil fuel transshipment facilities at Cherry Point.

The first demonstration that Larson referenced in his column was an August 24, 2017 demonstration which occurred at the Puget Sound Energy (PSE) office on N. State street in Bellingham, Washington. The demonstration was to express opposition to PSE’s LNG plant project at the Port of Tacoma, and to support the Puyallup Tribe’s strong opposition to the LNG plant which is sited right next to where the tribe’s residents live, and threatens their fishing, their waters and air.

According to Larson’s column, the WBA had invited representatives of the Bellingham Police Department to provide a presentation at a September 2017 WBA board meeting to discuss the rights of a business in the event of an unwanted demonstration. Several BPD officers, including then-Deputy Chief David Doll, participated in the presentation meeting with the board.

Larson said in his column that he considered the biggest takeaway from the meeting to be that, “business owners need to be prepared to instruct law enforcement to remove the individuals from the premises. And, to be prepared to have them prosecuted to the fullest extent of the law when they trespass on private property.” Boosting his “biggest takeaway,” Larson added this alarmist warning, “If there are no consequences, every business is a target.”

Doll told WBA board members during the September 2017 meeting, “It can be frustrating, because it takes a lot of time for the crisis disturbance unit to come in and make arrests.” Doll also told the board, “There’s no accountability and it emboldens the protesters.” He added, “We need your support from arrest through prosecution to make a difference in the long term.”

It was concerning to me that a Deputy Police Chief for Bellingham, generally recognized as a fairly liberal city, would be strongly encouraging businesses to prosecute non-violent protesters who would be arrested for trespass.

Also, in the opening sentence in Larson’s column, when describing the August 24, 2017 demonstration which occurred at the PSE office, he made what I suspected was, and what turned out to be, a false claim.

“On Aug. 24, a group of demonstrators called #nodapl (No Dakota Access Pipeline), or a.k.a. Red Line Salish Sea, unlawfully entered the offices of Puget Sound Energy (PSE) in downtown Bellingham and intimidated their customers and employees for more than 40 minutes.”

From all accounts of the August 24th action that I had seen, and from watching various video recordings of parts of that action which were posted on Facebook, I did not understand how WBA President Larson could have made such a claim. So, I contacted then-Deputy Chief David Doll, to speak with him about that claim and about the quotes attributed to him in Larson’s column.

Doll was promoted to Bellingham Police Chief in October of 2017, after then-Police Chief Clifford Cook had announced he would retire on November 30, 2017. Doll became Police Chief effective December 1, 2017.

I spoke, via telephone, with then-Deputy Chief Doll on October 19, 2017, and asked him several questions about Larson’s column in the WBA’s Business Pulse Magazine. The next day, I also traded emails with Doll regarding some follow-up questions I had for him.

After I read Doll the opening paragraph of Larson’s column, I asked him if Larson was correct when he claimed that the demonstrators “unlawfully entered” the PSE office in Bellingham.

Doll responded, saying, “No,” it was not unlawful for the demonstrators to have entered the PSE office that day. “When it’s open to the public, we don’t have authority to say you can’t go in.”

Larson, in his column, also referenced a February 2017 demonstration that occurred at the U.S. Bank in Bellingham, and he falsely claimed that those demonstrators had “unlawfully entered” the lobby of U.S. Bank. Just like the PSE office, the bank is open to the public, so, once again, Larson makes an untrue allegation about those demonstrators.

In referencing the demonstration at U.S. Bank, Larson described it with just one sentence which read: “A few months ago a group of demonstrators unlawfully entered the lobby of the U.S. Bank in downtown Bellingham with the purpose to disrupt and intimidate.”

The February 4, 2017 action by demonstrators at U.S. Bank was in opposition to the Dakota Access Pipeline, and was part of the “Divest From DAPL” national campaign which was applying pressure to financial institutions such as U.S. Bank, to withdraw their support of the company wanting to build the Dakota Access Pipeline, Energy Transfer Partners. The timing of the February 4 demonstration last year was likely influenced by President Donald Trump’s January 24, 2017 executive action advancing approval of the Dakota Access and Keystone XL pipelines.

Regarding the 2017 Bellingham PSE demonstration, it did not appear that the demonstrators were asked by PSE to leave the premises. Doll said that on August 24, “ten non-violent protesters were in the lobby — we monitored in the area outside.” BPD did not go into the PSE office. He explained that the complainant, Lynn Murphy, had notified BPD about the demonstration. Lynn Murphy is the local Government Affairs Representative for PSE.

According to Larson’s column, Patrol Lieutenant Don Almer, who was one of the BPD officers at the September 2017 WBA board meeting, told board members:

“…criminal trespass is committed when a person enters or remains on another’s property without the owner’s consent. A person charged with criminal trespass will be arrested, and can be barred from entering the business for a set period of time, or even indefinitely. The length of time is at the business owner’s discretion.”

“Once granted the authority, we will give the demonstrators the opportunity to leave voluntarily. Many do. Those that don’t, it is then a crime, and we can then forcibly remove them. Without explicit authority from the business to trespass, it would violate the protester’s [sic] civil rights to forcibly remove them from the premises.”

It’s my understanding that because PSE did not grant that authority to the BPD, that is why officers did not take any action other than monitoring from outside.

In my October 19, 2017 phone call with Doll, I asked him why it sounded like he was encouraging businesses to prosecute non-violent protesters who are arrested.

I’m unsure why Doll said the protesters, “are taking our [law enforcement’s] time and violating the law,” when he had just explained to me — and I believe his fellow officer, Lieutenant Almer, had also explained to the WBA board — that unless the businesses ask the protesters to leave their premises and they don’t leave, and unless the police are called by the businesses and after the police would give protesters the opportunity to leave voluntarily, they don’t leave, then only in that circumstance would the protesters be “violating the law.” As previously stated, demonstrators in both the PSE and the U.S. Bank demonstrations, left voluntarily.

In my October 20, 2017, email I sent to Doll following up on our our phone conversation from the day before, I asked him again about remarks attributed to him in Larson’s column. Doll was addressing WBA board members. That section in Larson’s column reads:

“It can be frustrating, because it takes a lot of time for the crisis disturbance unit to come in and make arrests,” explained Deputy Police Chief Dave Doll. “Then charges get dropped later. There’s no accountability, and it emboldens the protesters. We need your support from arrest through prosecution to make a difference in the long term.”

It is unclear exactly what difference Doll thinks would occur in the long term if businesses were to support law enforcement from arrest through prosecution.

I asked Doll to elaborate on what he meant when he said, “it emboldens the protesters,” and I asked if he could give me a couple examples of how the protesters would be emboldened. He responded in an email saying:

“My comment regarding follow-through in cases where prosecution is involved, is that without consequences for illegal activity, such activity may continue, or people involved may feel that there are no consequences at all. I do not have any specific examples at the moment concerning ‘protests,’ but, as I stated in our phone conversation, did not want complainants to agree to press charges, have law enforcement take enforcement action and then later not follow-through with prosecution.”

To sum things up, contrary to Tony Larson’s statements in his column, the non-violent demonstrators who participated in both the PSE and the U.S. Bank demonstrations last year, did not unlawfully enter either of those business establishments. Larson made his false claims of illegal entry, while cheering on the very types of fossil fuel projects from which water protectors were trying to protect their community and others. Meanwhile, BPD’s David Doll could not provide any examples of protestors being emboldened in our community by what he said was a lack of accountability.

Speculative alarm about trespass and false alarm about illegal activity regarding local demonstrators, coupled with any statements prompting business owners to be willing to support the potential arrest and prosecution of demonstrators to the fullest extent of the law, seems unwarranted and irresponsible. What’s more, it creates a climate that could chill the exercising of First Amendment rights to free speech and assembly by members of our community.

iThere are no comments