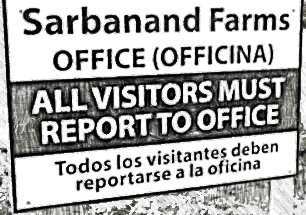 Adding to the list of the Washington State Department of Labor & Industries’ (L&I) inspections of Sarbanand Farms in Sumas, Washington, in 2017, is another safety and health inspection I learned more about on Wednesday, April 25. Inspection number 317946364 was conducted by L&I’s Division of Occupational Safety and Health (DOSH) after being initiated back in June 2017, although it was not mentioned in L&I’s February 1, 2018 press release announcing its findings from investigations at Sarbanand Farms which the department initiated in August 2017.

The DOSH inspection initiated in June 2017 did find that Sarbanand Farms had committed a serious violation involving an employee injury. 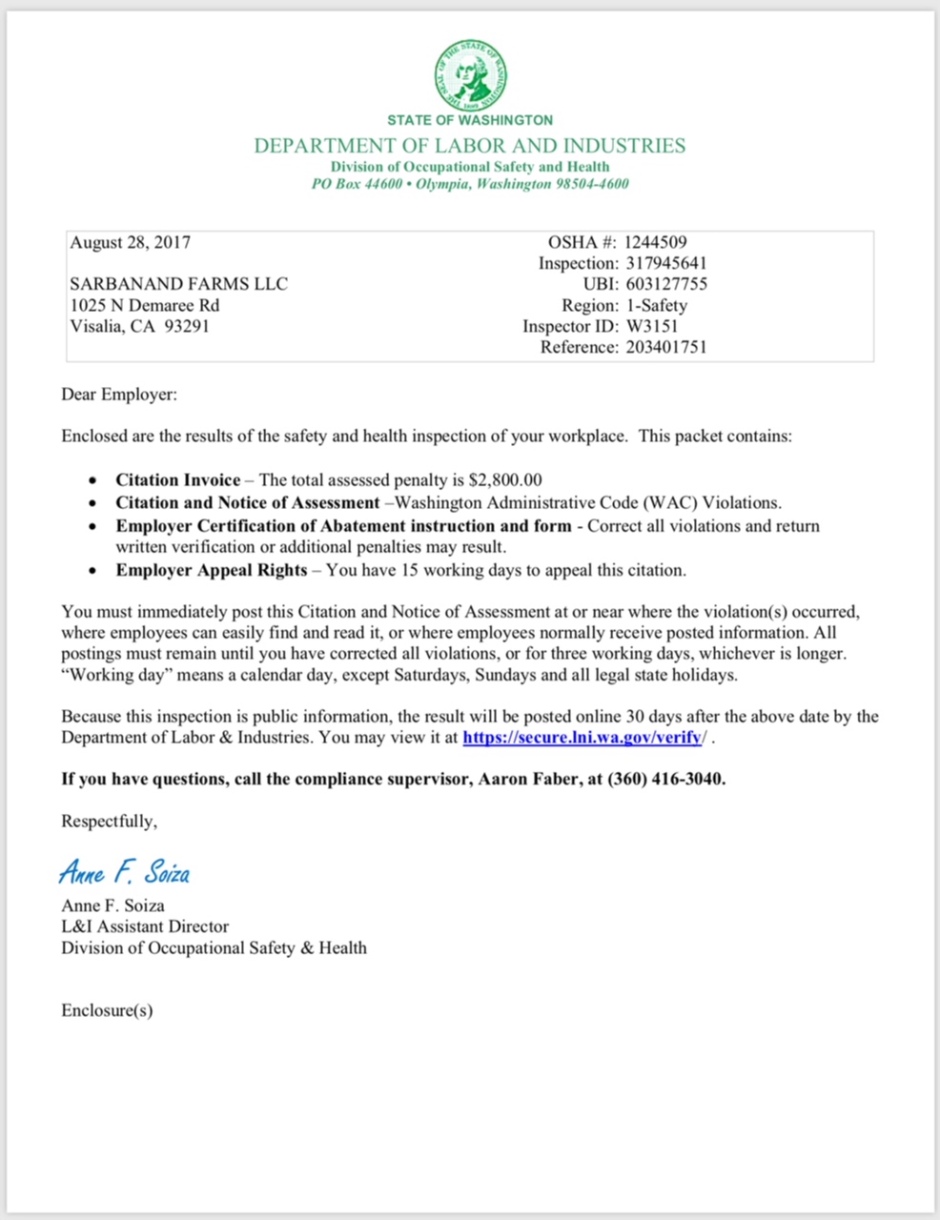 According to L&I Public Affairs Manager Tim Church’s April 25, 2018 email response to my April 9 email inquiry, the DOSH safety and health inspection was initiated on June 28, 2017, after L&I received a report of a hospitalization due to a reported finger amputation on the job.

The June 28, 2017 opening of the DOSH inspection appears to have closely preceded the arrival of approximately 600 H-2A workers from Mexico, who, to my best understanding of the records released to me, thus far, by L&I look to have arrived at Sarbanand Farms on or around July 4, 2017.

According to Mr. Church, the DOSH safety and health inspection, initiated on June 28, 2017, was not part of the overall concurrent, multiple inspections of Sarbanand Farms which were conducted after the death of an H-2A worker, Honesto Silva Ibarra, who was one of those nearly 600 H-2A workers hired to work at the farm for the 2017 summer blueberry season.

An April 23, 2018 article I wrote provides details on the extent of violations revealed in public records obtained from L&I relating to those concurrent, multiple investigations it conducted of Sarbanand Farms last summer, subsequent to Mr. Silva Ibarra’s death in early August of 2017. Mr. Silva Ibarra had become ill while working at Sarbanand Farms, was taken by ambulance to a local hospital on August 2, 2017, and eventually died in a Seattle hospital on August 6, 2017.

My April 9 email inquiry sent to Mr. Church included several questions I had regarding a reference in L&I records I obtained of its department’s findings from its 2017 pesticide investigation of Sarbanand Farms, which was part of the concurrent, multiple investigations conducted after Mr. Silva Ibarra’s death. The reference, albeit brief, in the pesticide investigation findings noted that the farm was cited for not maintaining OSHA 300 records as a result of the DOSH inspection opened on June 27, 2017. The brief reference noted that OSHA 300 records for the years 2016 and for 2017 were “Not Available.”

Washington state statutes require that businesses such as Sarbanand Farms maintain an OSHA 300 log with records of workplace injuries and illnesses.

Along with answering the email questions I posed to him, Tim Church sent me a copy of a Citation and Notice of Assessment issued by L&I on August 28, 2017, to Sarbanand Farms. In looking at the citation, it appears to list 2 violations, one of which has 3 listed associated items.

The first violation (“Violation 1 Item 1”) was classified as a “Serious” violation according to the citation document. L&I found that Sarbanand Farms “did not protect the employees from injuries that could possibly lead to broken bones, partial amputation of body parts, in that, guards or shields were not provided at the access point of where the belt contacts the motorized pulley on the pole tank sprayer.”

The “Violation 1 Item 1” document goes on to say, “Employee received a partial amputation of his middle finger on his right hand when he came into contact with the unguarded pulley.” The citation record shows that the farm was assessed a penalty of $2,800 by L&I.

The other violation includes 3 items, each of which, were each classified as “General” in terms of the violation type. There was no penalty assessed by L&I for this violation.

“Violation 2 Item 1” stated that Sarbanand Farms did not ensure that the farm’s Accident Prevention Program contained all of the required elements in that it did not describe the following items:

“Violation 2 Item 3” stated that Sarbanand Farms “did not maintain an OSHA 300 Log form for the current calendar year 2016.”*

The “Violation 2 Item 3” document explained that employers who do not maintain a record of work related injuries and illnesses would likely not be able to detect accident/injury patterns and correct such hazards, which would increase the probability of additional accidents and injuries from the same hazard.

It is important to note that according to L&I’s citation, the correction due date for correcting the issue of maintaining an OSHA 300 log was September 30, 2017, which was after Honesto Silva Ibarra became ill while he was working on the farm. So far, it is not known if Sarbanand Farms made the correction and was maintaining an OSHA 300 log while Mr. Silva Ibarra and the rest of the H-2A workers were working there last summer.

The fact that Sarbanand Farms was cited by L&I for having committed these safety and health violations, and subsequently was cited in L&I’s employment standards investigation, initiated in August 2017, for having committed 13 violations of missed rest breaks or late meal periods during the 15-day time period reviewed by the department, indicates the farm was not adequately safeguarding the workers who were in the farm’s charge.

A question which needs to be answered is whether or not Sarbanand Farms has been adequately safeguarding workers who have been in the farm’s charge after the investigations L&I initiated in August 2017.

*It is unclear why the citation specified calendar year 2016 in terms of the farm not having maintained an OSHA 300 log, but the year 2017 was not listed even though according to L&I’s pesticide investigation findings, it was noted that the farm did not have OSHA 300 log records for both years 2016 and 2017. I inquired with L&I about this point, and am awaiting a response from their department. I am also waiting for L&I to release public records I requested on April 17 pertaining to DOSH Inspection 317946364 discussed above for which I have the corresponding Citation and Notice of Assessment issued by L&I on August 28, 2017.