[Editor’s note: This story has been updated on September 23, 2019 to reflect the fact that sometime today (September 23, 2019) the “Sheriff Bill Elfo” profile appears to have been removed from the We Speak social media platform. Now, when searching on We Speak by entering the former profile name, “Sheriff Bill Elfo,” that particular profile no longer produces any search results. In addition to this new development, it appears that the Re-elect Sheriff Bill Elfo Facebook page has removed the post declaring that “We Speak is running most of Re-elect Sheriff Bill Elfo’s campaign,” which had been posted on that Facebook page on Thursday, September 19, 2019, and which is referenced in this article with an accompanying screenshot photo.]

The Searchlight Review had published a September 8, 2019 article, “Local Trump devotees launch Christian conservative social media platform,” that centered on We Speak which was rolled out by Ray Gilbride and his We Speak team at the American Legislative Exchange Council (ALEC) annual conference held this year in Austin, Texas, August 14-16.

We Speak aims to get conservative candidates elected

According to Ray Gilbride’s numerous posts on both We Speak and Facebook about his new Christian conservative social media platform, the aim of We Speak is in large part to influence elections to help get conservatives elected — especially the 2020 election for U.S. president as Gilbride is a fervent Donald Trump supporter. In a We Speak promotional video featured in an August 16, 2019 post displayed on WeSpeak.com’s Facebook page about the new platform’s rollout during the ALEC conference, Gilbride claimed that the new platform is, “gonna change the way the election works,” and that We Speak is, “gonna bring 12 million votes to the good side this time.”

Gilbride, whose Twitter page profile states, “founder of WeSpeak.com working hard to Keep America Great and our President in office, go Trump!” posted a tweet on September 18, 2019 that reads:

“The growth of wespeak.com is outstanding. We are 1 and 2nd amendment frendly [sic]. We stand with our President. We do not censor the conservative message. You own your information and can down load [sic] all your contacts to your system. Just a few of the many that make us great.”

On both his We Speak and Facebook pages, Gilbride has been advocating for Bill Elfo in his re-election bid for sheriff of Whatcom County. The Re-elect Sheriff Bill Elfo Facebook page posted a September 20, 2019 post which reads: “Your support is appreciated, Ray Gilbride. Thank you.” That Facebook post was in response to, and linked-to, a We Speak post made that same day by Gilbride which featured a 10-second audio clip of him saying, “I stand behind Bill Elfo,” (as a candidate for sheriff) and encouraging others to do the same.

Ray and Danielle Gilbride introduce We Speak to Skagit GOP

Since rolling out We Speak in mid-August at the ALEC conference which offered a rich supply of like-minded people for their new social media platform geared toward Christian conservatives, co-founders Ray and Danielle Gilbride has also been actively promoting it closer to home. About 30 miles south of where they live in Bellingham, is the city of Mount Vernon, in Skagit County. Recently, Ray Gilbride was a featured speaker with two groups in Skagit County which are comprised of conservative-thinking people: the Skagit County Republican Party, and the Skagit County Citizens’ Alliance for Property Rights (Skagit CAPR).

“Skagit Republicans ‘WeSpeak.com’ Team. ‘We Speak’ is a Social Media Platform sweeping the nation. Included in the post is a link to a 2-minute promotional video about We Speak that was produced by American Zealot Productions. The post indicates there may be a “We Speak.com Team” within the Skagit County Republicans’ organization that has a particular focus on We Speak.

A September 19 post about their meeting scheduled for that evening that was displayed on the Skagit County Republicans’ Facebook page said that most, if not all, of the six candidates seeking nomination for the 10th Legislative District senate seat to replace outgoing Republican state Senator Barbara Bailey would be featured at that meeting. Senator Bailey, who is in the midst of her second term, will step down from her senate seat on September 30, 2019.

The 10th Legislative District includes southwest Skagit County, Island County, and northwest Snohomish County. According to a September 18, 2019 article published by goSkagit.com (the online version of the Skagit Valley Herald), Skagit County Republicans’ chairman, Bill Bruch, said Republican precinct committee officers will be meeting on Oct. 3 in Mount Vernon to nominate three candidates for the vacated position. The article reported that at a meeting of Skagit, Island, and Snohomish counties’ governing boards, set for Oct. 18, one of the three nominees will then be appointed to the senate seat.

We Speak founders are guest speakers at Skagit CAPR meeting

On September 14, Ray Gilbride and his wife Danielle Gilbride were among the approximate twenty people who attended the Skagit CAPR’s monthly meeting held at 9:00 AM, at Skagit Valley’s Farmhouse Restaurant.

Skagit CAPR is a local chapter of the Citizens’ Alliance for Property Rights (CAPR), which, according to its website, was organized in 2003 as a non-partisan political action committee. CAPR’s stated mission on its website is, “to protect and restore property rights by identifying, training, and mobilizing members in effective action during the legislative and election seasons to ensure political accountability toward our pro-property agenda.” That pro-property agenda has included their group taking actions which can be described as anti-tribal treaty and anti-tribal sovereignty, as well as taking actions in opposition to various environmental regulations.

According to a September 14 post displayed on the Skagit County Citizens’ Alliance for Property Rights Facebook page, Ray and Danielle Gilbride were guest speakers at the September 14 Skagit CAPR meeting, and gave a presentation to attendees there about We Speak. Skagit CAPR, which also has a We Speak profile, made a similar post on We Speak featuring a photo of the breakfast meeting that same day. 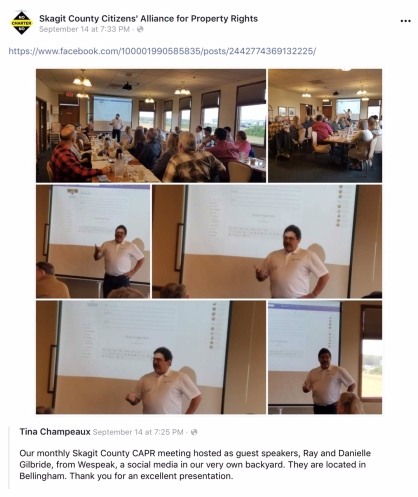 Senator Ericksen, who is friends with Ray Gilbride and has been actively involved with promoting We Speak since February of this year, was one of the individuals featured in the promotional video for We Speak that was shown at We Speak’s booth during ALEC’s annual conference held last month in Austin.

In a September 20, 2019 We Speak post made by Ray Gilbride, he said that in the months to come the We Speak team will be spreading the word about its new social media platform in Washington, D.C., New York, Boston, Texas, Arizona, California, and Florida.